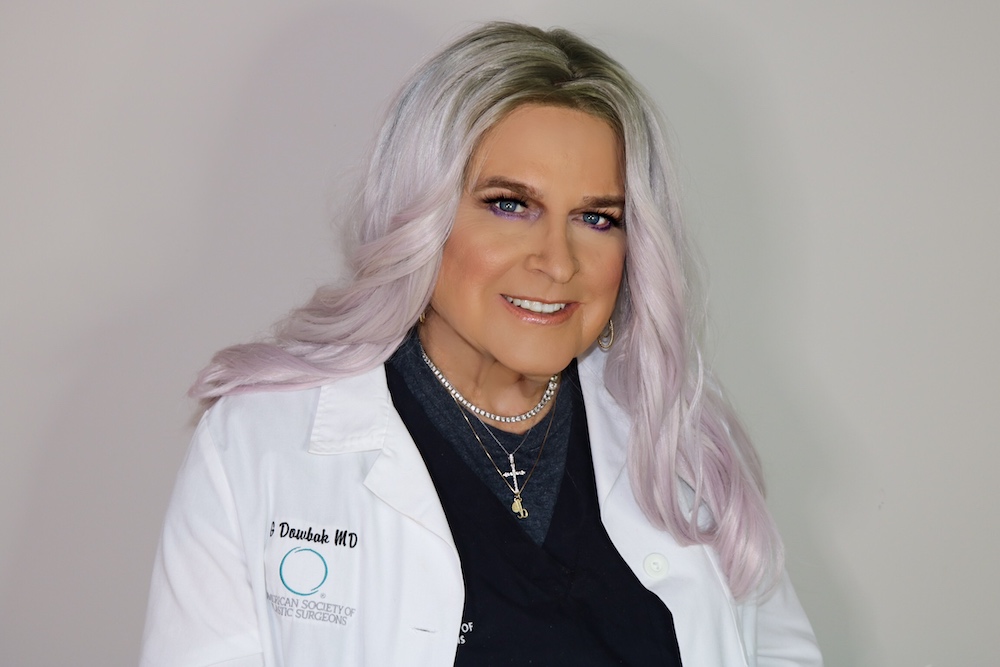 Gregory Max Dowbak, MD is a board certified plastic surgeon and medical director of the Christine Jorgensen Center of Excellence for Transgender Care and Surgery with offices in San Francisco and Miami. She received her undergraduate education with highest honors at Indiana University and subsequently attended the State University of New York (SUNY) Downstate Medical College in Brooklyn, New York. In her final year at Downstate Dr. GM Dowbak received specialized training in orthopedic surgery at St. Bartholomew’s Hospital in London and gender confirmation surgery at the Gender Identity Clinic at Johns Hopkins Medical Center, the first of its kind in the United States. After completing a rotating internship at the University of Oregon (which included specialized training by Dr. Ira Pauley a leader in the field of transgender issues), she returned to Downstate where she completed her general surgery, vascular surgery and plastic surgery training. After 11 years of solo practice in plastic and reconstructive surgery in Central California, she completed a one year hand and micro-vascular surgery fellowship at the University of Texas Southwestern Medical Center-Parkland Memorial Hospital in Dallas, Texas and advanced training in microsurgery at the University of Louisville. Dr. Dowbak has also received advanced training in transgender surgery by some of the world’s leading surgeons in the United States and worldwide.

She has been involved in performing and teaching plastic surgery in several third world countries, specifically reconstructions of congenital hand anomalies in children. In 1992, she was selected to participate in the Presidential Initiative “Operation Provide Hope” in Russia and Central Asia. In 1994, as a member of the United Nations Disaster Assistance Relief Team (DART) under the direction of the United Nations High Commission for Refugees (UNHCR), she spent two months in Sarajevo, Bosnia as the only plastic and hand surgeon while the city was under siege, being flown in with a group of other doctors and surgeons on a Swedish C-130. While there Dr. Dowbak performed numerous complex surgeries under “war-time” conditions (no running water, no electricity, no sterile gloves, no sterile gowns, no antibiotics). Dr. GM Dowbak volunteers her surgical services to all children in need and additionally specializes in gender confirmation surgery in San Francisco and Miami and is the medical director of the Christine Jorgensen Center of Excellence for Transgender Care and Surgery (CJC) whose employees are all transgender serving the transgender community, the first of its kind. CJC has a strong commitment to diversity and strives to be the leading provider of transgender care and surgery throughout the world and is also engaged in cutting edge research such as the use of stem cells and 3D engineering to create an implantable vagina for trans women.

Dr. GM Dowbak is a Diplomate of the American Board of Plastic Surgery and an Active Member of the American Society of Plastic Surgeons. Additionally, in 1994 she was granted the Certificate of Added Qualifications in Hand Surgery (CAQHS) and has successfully performed numerous orthopedic and plastic surgical operations with high degree of difficulty. In 1995 Dr. GM Dowbak became a Qualified Medical Evaluator in California. She is also certified by the State of Florida in laser physics and clinical applications and is “cannabis certified” by the State of Florida and has treated over 44,000 patients with medical cannabis (all documented with date of treatment, name and diagnosis). She speaks 3 languages: English, Russian and Spanish.. She is currently studying German and is at “conversant level.” Prior to becoming an Active Member of the Jimmy V Foundation after a successful battle with melanoma, she was an active athlete, having completed 38 marathons in three countries. Her personal best in the marathon (26 miles 385 yards/42.2 km) is 3 hours 14 minutes (San Francisco Marathon), the half marathon-1 hour 18 minutes and the mile-4 minutes 15 seconds. She competed in the women’s 1992 Olympic Qualifying Marathon in Houston finishing in the top 20 percent. Dr. GM Dowbak served in the US Navy for 11 years and was honorably discharged July 1, 2005 with rank of Commander (O-5). She was assigned to the Fourth Marine Division as Battalion Surgeon and on September 6, 1996 was awarded a “Certificate of Commendation” from the United States Marine Corps for the care of an injured United States Marine while on Active Duty.

Dr. GM Dowbak has been active in the Plastic Surgery Education Foundation, having served on the Hand and Upper Extremity Sub-Committee of the National Board of Medical Examiners from 1993-2002 for the Plastic Surgery In-Service Examination which is a supplement to the teaching curriculum of most plastic surgery programs in the United States and overseas. She has served on the 1997 and 1998 PSEF International Symposia Committee meetings held in the Ivory Coast and China. She has published numerous scientific articles and has lectured at the Karolinska Institute in Huddinge, Sweden, Yonsei University in Seoul, South Korea, Moscow State University in Moscow, Russia, the Israel Plastic Surgery Society in Jerusalem, Israel and before the Canadian Aesthetic Laser Society in Toronto. Dr. GM Dowbak is nationally known for starting the very first medical spa in the State of Florida and for having pioneered such non-invasive techniques as the Radiance Laser for the treatment of acne, the FOTO-Facial RF for the removal of brown and red spots as well as rosacea on the face, the Polaris Laser for the treatment of fine wrinkles on the face and Venus Freeze for Lifting of saggy skin. Dr. Dowbak was the first to bring the Dornier 940 Diode Laser for the treatment of spider and reticular veins and for the ablation of the saphenous vein. She has used it successfully to “erase” certain scars without leaving an open wound. Dr. Dowbak provides advanced and highly skilled medical and surgical treatments for the male to female transgender patient including top and bottom surgery as well as advanced body contouring with a Brazilian Butt Lift and has presented several papers in scientific meetings on her technique (ASPS Annual Meeting 2017 in Orlando and Aesthetica 2018 in Las Vegas).

Dr. GM Dowbak strives to keep up to date on all innovations in plastic surgery and incorporates those with merit into her practice. She has authored two books- one on non-invasive plastic surgery (“Beauty is Power”) and has recently written a book on medical marijuana based on her extensive experience with over 44,000 patients (“Curing the Incurable”). She is currently preparing her third book “Sex Change Surgery.” After 11 years of training and 35 years of practice of hand/plastic surgery, Dr. GM Dowbak has a perfect safety record with no lawsuits or accusations, etc. ever.

Dr. Dowbak commitment to diversity is demonstrated by: 1) overseas volunteer surgery (Russia and Central Asia); 2) Helping to support the first shelter in San Francisco for transgender homeless; 3) Working with local colleges and universities to provide educational opportunities for her transgender patients; 4) offering free surgery to victims of female genital mutilation (FGM)- The CDC estimates there to be over 513,000 victims in the United States and over 2-3 million worldwide; 5) Sharing what she has learned with scientific presentations in Sweden, South Korea, Israel, Russia and Sarajevo Bosnia; 6) Consistently working for access to quality care for her patients of all ethnic and religious backgrounds and national origins proudly noting that no one is ever turned away at the Christine Jorgensen Center of Excellence because of financial status. Those who come to CJC will not only be welcomed by our all transgender staff, but also embraced.